"Dr. Rewers and her entire staff are amazing, believe me; I would know. My dog Chloe was a patient there her entire short life. She battled cancer (diagnosed at 5 1/2 years old with mast cell cancer) and I firmly believe the 7 months I got after diagnosis was due to the acupuncture and holistic treatment she received. She LOVED each and every treatment and found great enjoyment and Zen following each treatment. As someone spending hours upon hours at vets I can’t more highly recommend this doctor and her staff. They made room for an emergency appointment always and always took the time to show care and compassion in our time of treatment. These are top notch folks who really care and have a passion and commitment to help our beloved pets."
--Heather, Seattle

“Thanks for saving my dog!”
--Frank Dux, Seattle

“Our thanks to you for all your help, compassion, empathy, information, and concern you have shown for our dog.  She was very special to us and your help allowed her an extended life and greatly increased mobility and quality of life for the last 17 months of her life.  We so appreciate all your expertise and care.”
--Cathy, Seattle 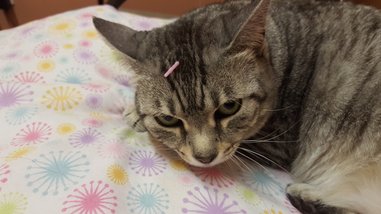 “I received more benefit from holding my dog during her acupuncture from Dr. Rewers than I have from any acupuncture session I’ve ever received for myself!”
--Anna, Seattle

“My cat had not been eating much for weeks and she was very sick.  Acupuncture helped, then Dr. Rewers did distance reiki for my cat.  At exactly the same time the energy work was being done from a distance, my cat got into the closet and ripped open a new bag of food and started eating voraciously!  After just two acupuncture treatments, two reiki sessions, and a lot of good nutritional counseling from Dr. Rewers, my cat continues to do well over a year later.  Amazing!”
--Deborah, Seattle

“A little over a year ago, I made the decision to rescue an adorable male American Bulldog/Boxer mix named Mugsy.  A month after living in Seattle, he began to develop several medical problems such as eye allergies, GI upset, and skin allergies/severe hives.  Over the course of 3 months, we took Mugsy to several veterinarians and a dermatologist, where he was prescribed various antibiotics, steroids, antihistamines, and was even given an allergy skin test.  None of these procedures or medications had any positive effect.  In some cases, he actually developed new symptoms and side effects. It was then that a friend recommended Darla.  Darla began treating Mugsy with acupuncture and Chinese herbs and within 2 weeks, all of his symptoms were gone.  After 3 months of misery, he was finally back to normal.

Darla has forever changed Mugsy’s life and I am so grateful to have her in our life.  I don’t know where he would be if I chose a more western approach and took the path of allergy shots and drugs.  I highly recommend Darla as a veterinarian not only for her competency but also for her compassion and caring spirit.  Her love for animals comes across in everything she does and she often goes above and beyond to help animals and their families.  We now have a new rescue dog named Lucky who came from an abusive home and suffers from severe separation anxiety.  Darla has been treating her with acupuncture and Chinese herbs and she is less anxious and much calmer now.  Thank you Darla for everything and most importantly, thank you for being you!”
--SR, Seattle 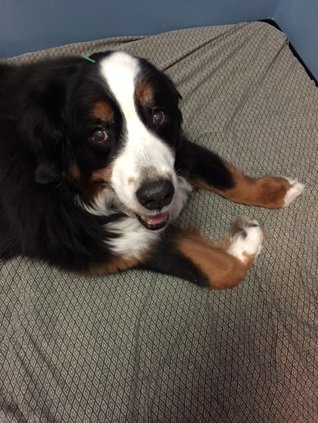 “My 12-year-old pug had a serious back injury that ended up being both a cyst and ruptured discs caused by the injury and general old age. Dr. Rewers kept him pain free and walking both before and after surgery. After each session, he was more relaxed and able to perform his physical therapy for longer periods of time. He has now gone from almost paralyzed to walking and climbing again. Dr. Rewers has also helped our family of pugs through everything from upset tummies to kennel cough. She has a wonderful spirit that the pugs love to be around.”
--Kristie, Seattle

“Rocko had a small, smooth, pink growth on one of his toes. It looked like it could be a wart but I was concerned that it may be a tumor from the location and because it was growing in size. He was never bothered by this growth but it really didn’t belong there. Dr. Rewers examined Rocko and suggested that I use Sarcoma Salve and Wound Balm on Rocko’s toe for a few consecutive days per week and to see what happened over the next couple of months. I applied the Sarcoma Salve and Wound Balm as directed for about 6 weeks and really didn’t notice much change. Then, one night we were watching a movie and I was playing with Rocko’s feet. I felt a bit of hard, peeling skin on his toe. I looked at his toe and found the area where the growth was to be covered in thick dead skin. He did not protest, so I peeled the skin off. Where the growth had been, there was a small hole like someone had stuck him with a needle. Nothing was coming out of the hole. A few days later, his toe looked completely normal - no hole, no dead skin, no sign of the growth that he had previously had for over a year. I was so happy and so relieved. Thank you.”
--Jilian Sarno 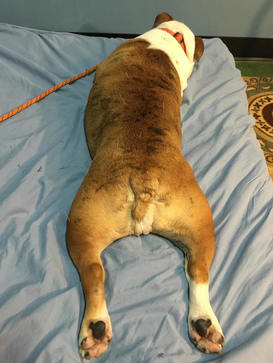 “Bama is our 10 year old White Shepherd.  She was my husband’s dog before we were married, and when I first met him she was already starting to show signs of incontinence.  Over time, her symptoms got worse and we eventually had to put her on steroidal medication.  When Dr. Rewers offered her services, my husband was skeptical, but willing.  I have personally experienced the benefits of acupuncture, and therefore anticipated seeing the effects of the treatment.  However, I did not expect to see such quick, responsive results.  We were both amazed.  Bama was off her medication and had no problems for almost a year.  Another treatment the following year yielded similar results.  We are only sorry that Dr. Rewers does not reside in our hometown, as we would entrust her with the continuous care of all our pets!”
--Kastin A. Krupinski

“Thanks so much for the acupuncture! Sometimes I’m not sure Kili, my 15 year old dog,  wants to go for a walk at all. After her last treatment we went to a park and she was running through the tall grass and jumping over logs like she was a pup. When she jumped up a three foot wall I thought I was watching a different dog. This is great! Thank you.”
--Dean, Seattle

“(My cat) doesn’t have seizures when she gets acupuncture from Dr. Rewers on a regular basis.  She also sleeps better and is more relaxed and alert.  I see the difference the acupuncture treatments make.”
--MN, Redmond